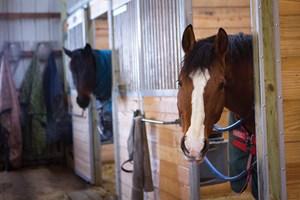 Weaving is one of several “stereotypies” often called stable vices, which are repetitive, seemingly functionless behaviors that also include stall walking, cribbing, pawing, and headnodding (which is different from headshaking). Weaving is defined as an obvious lateral swaying movement of the head, neck, forequarters, and sometimes even hindquarters. It is considered to be closely related to stall walking (repetitive tracing of a circular route within the stall), as it has been found that if a horse either weaves or stall walks, it is much more likely to perform the other action instead of a different stereotypical behavior.

What can be done about it?

Because unusual or inappropriate behavior can be caused by a medical condition, it is important to have any horse displaying a stereotypie examined by a veterinarian. In a 2005 presentation at the American Association of Equine Practitioners annual convention, researchers recommended the following strategies to prevent and manage weaving and stall walking:

What else do I need to know?

Scientists continue to study why some horses develop stereotypical behaviors and why some don’t. We do know that behavior is neither purely learned (say from watching and perhaps mimicking another horse) nor purely genetic but a combination of both. We also know that it’s better to prevent weaving or stall walking in the first place but if that’s not possible, then reducing cues and predictable routines that cause horses to anticipate feeding or exercise—while allowing access to a real or imaginary social partner—may help manage this undesirable behavior.